KwaZulu Natal will literally leave you breathless. A deep blue ocean meets golden beaches, giving way to banana plantations, lagoons, and the greenest rolling hills, disappearing into the distance of the Drakensberg Mountains. Also known as “The Barrier of Spears”, the 200 km stretch of the mountain is a wonderland of cave paintings, with the highest peak reaching well over 3000 meters above sea level. This 243 000 hectare mountain region is a bio-diverse and historically rich national heritage site.

The North Coast, or more popularly known as the Dolphin Coast, stretches from Zimbali all the way to the mighty Tugela River. Here, scores of Bottlenose Dolphins can be seen frolicking along the coastline all year round. The South Coast is a very popular holiday destination, both locally and internationally, thanks to mild weather and a warm ocean all year round.

The area is a magnet for adrenaline junkies and thrill seekers. Both the North and South coast beaches offer the best surf and snorkeling in the entire country. It is a paradise for mountain bikers, golfers and fishermen alike. KwaZulu Natal literally caters for everyone at any time, whatever your idea of fun. Catch the seasonal whale migration or the not-to-miss annual sardine run in their millions. Explore the epic battlefield and historically rich towns. Lose yourself in unique and authentic arts and crafts, and becoming completely emerged in live performances ranging from progressive theater to multi-music genres.

Nowhere else in South Africa will you find a larger concentration of cultural diversity. East meets west when following in the footsteps of Mahatma Gandhi. North meets South in the colonial reminders left from the settler age, with the pulse of Africa beating underneath all of it. 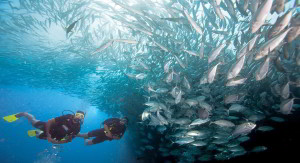 Overlooking one of the busiest harbors in Africa, Durban is the gateway city into the Zulu kingdom. The biggest city in the region, this is where everything is hip and happening. It is an exciting city in which to both relax and play, shop and experience the nightlife. Durban fuses all the cultures together in a Zulu motif. Explore the flea markets and arts and crafts at leisure at the waterfront. Towards the city center, you will find oriental bazaars fragrant with exotic spices and silk.

Modern pubs and clubs are scattered throughout the city and concentrated on the beach front. Nightlife is pulsing, and the city does not sleep. Visit uShaka Marine World for a close encounter with marine life. For a truly unique native African experience, you have to take a ride on the Zulu Rickshaw! Strong men follow a long-standing tradition of pulling tourists around the waterfront in a two-wheeled cart. It is quite thrilling when they jump, sending the rickshaw into “see-saw” mode. Rickshaw “drivers” can be seen a mile away with their bright and heave head-dresses.

A breathtaking and untamed area, The Elephant Coast is part of the north-east region, stretching from St Lucia all the way to Swaziland and Mozambique. The coast is named after Africa’s largest herd of elephants that lived here for centuries. Humpback and Southern Whales migrate along this route between July and December. They use this area as nurseries during mating season and when caring for their young. The stretch of coast is also home to families of ancient sea turtles during the summer months.

Stretching 220 km along the coast to the border of Mozambique, Lake St Lucia, 30 000 hectares of wetland, was declared a Natural Heritage Site in 1999. The area is vital for the survival of bird-life, not just locally, but internationally. Birds from Northern Europe and Asia migrate here to escape the harsh winter months of the Northern countries. St Lucia is home to an abundance of coral reefs, long sandy beaches, lagoons, lakes, swamps, wetlands, savanna, woodland, and dunes…and hippos and crocodiles, so be warned! Do not go swimming unless it is in clearly designated areas. 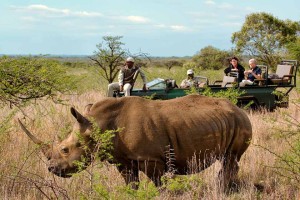 Zululand is teaming with game reserves. Reserves include Ubizane, Thula Thula, AmaZula and Pinda, only to mention but a few. There is an abundance of game, including the famed Big 5 that roam around freely in protected areas. The big game is not only limited to majestic land creatures. See massive dung beetles and bearded vultures in action. One of the most popular parks in the region is the Hluhluwe Umfolozi Park. They offer great self-drive game viewing excursions and many private luxury lodges within the reserve. Most lodges will include all meals and game drives in their rate. Safaris do not have to be land bases either. Book an ocean safari and get to meet the marine life, from mischievous seals to playful dolphins.

The Zulu Wars during the time of colonization are far too numerous to mention. Shaka Zulu, the Battle at Spioenkop, the Battle of Blood River… these are just some names that made history. Then there is the Anglo-Boer war when South African aimed to gain independence from the English crown, and Mahatma Gandhi’s own political battle and struggle as he came south from India.

Retrace the footsteps of these great minds and military strategists. Visit ruined fort and lone graveyards. and let history unfold. Battlefield tours can be booked in the capital through tourist information, or online. Knowledgeable guides will talk you through every major battle, explaining the strategies used and bringing history to life.