Kenya is home to many outstanding safari destinations and national parks, the finest of them is undoubtedly the Maasai Mara National Reserve, or “the Mara”. The Mara is part of the phenomenal Serengeti-Mara biosphere.

The Mara is home for all big cats: leopard, cheetah and the rarely spotted lynx-like caracal, and prides itself with the largest lion population in Africa, best seen during the drier season from December to February.

These are a small selection of the safari tours we have created in the Masai Mara. We customize all our packages, so get in touch and we can build one for you. 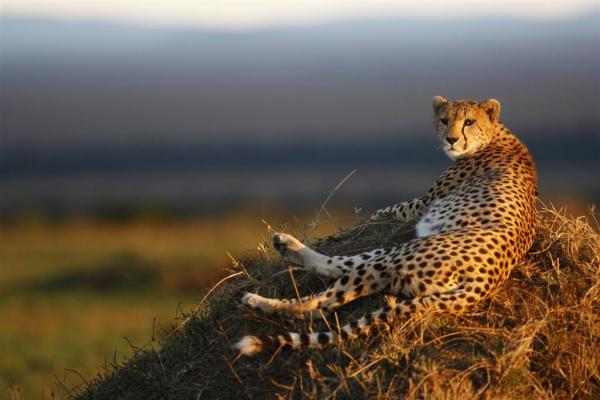 This spectacular trip to Kenya and Tanzania brings visitors to two incredible locations: the Masai Mara for the Great Migration and Zanzibar, for a tropical island getaway.

Expect to be swept off your feet as you experience the true treasures of the world famous Masaai Mara’s wilderness and the Kenyan coastline.

The camp’s remote location makes it exclusive and peaceful while offering guests to experience the migration and its star-filled night sky uninterrupted. A great location for honeymooners especially, with privacy and romance guaranteed.

Kichwa Tembo should be your first choice if you are interested in experiencing the Great Migration, and if you want an authentic safari in an absolute secluded wilderness. 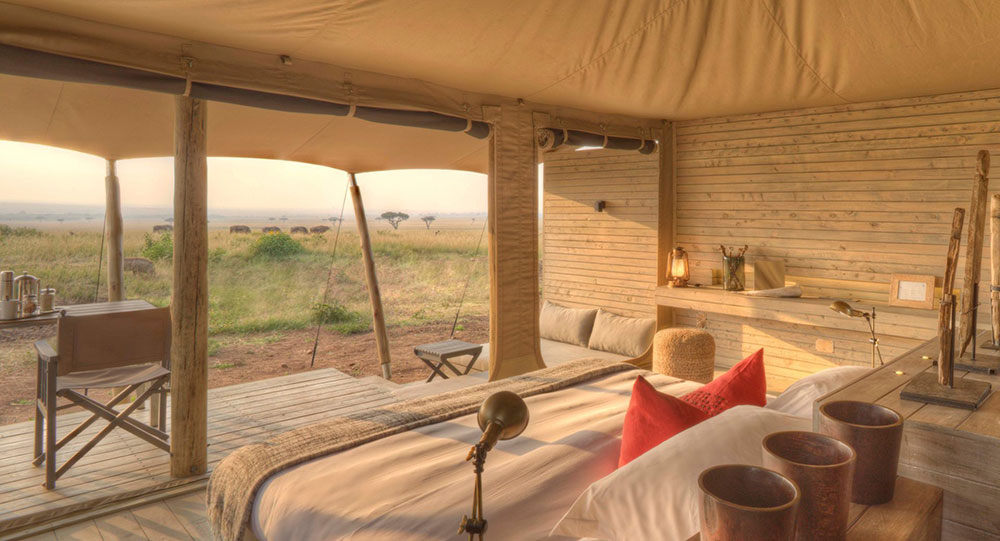 A world-famous event occurs in the Mara once a year. Not only are there more than two million wildebeests, zebras, eland antelopes, Thomson gazelles, and other hoofed animals, but also those visitors who wish to watch the colossal spectacle of the Great Migration. It is classified as one of the ‘7 New Wonders of the World’. And a wonder it truly is!

Arriving from the northern slopes of Mount Kilimanjaro, up to 30 mile long columns of ungulates pass through the Serengeti National Park and cross the border into Kenya as they migrate into the Mara plains. The animals densely populate the shimmering verdant grasslands, soaked by permanent rivers, the Mara and the Talek River. The riverine forests are inhabited with rare and awesome leopards. 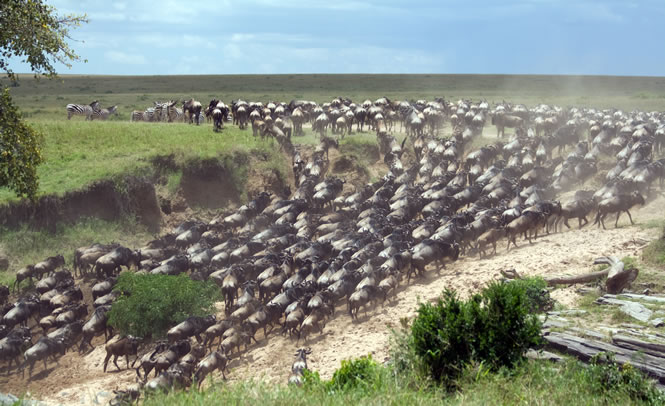 Several Mara River lodges form platforms for Gnu watching. This is where the action is. The scene is filled with a multitude of grey wildebeest bodies, nervously waiting for the right time to leap into the raging waters, where hungry Nile crocodiles lurk, anticipating their share. Meanwhile, lions hide in the riverbank’s bush thickets, to feast on some unfortunates who wrongly thought they’d made it to safety.

There are few guarantees in nature’s timing but generally, it is recommended to visit the Mara between July and October when the herds of migrating animals arrive at the end of their annual cycle, rest for a while, and then return to the Serengeti in Tanzania. This incredible journey pattern has been repeated year after year for millennia.

Maasai Mara is an all year safari haven, populated with all the mammals, birds and reptiles a safari tourist longs to see. First and foremost it is home of the “The Big Five” – elephant, lion, leopard, rhino and buffalo,
The most endangered among these is the Black Rhino, poached and hunted for their precious horn which is, tragically for the rhino, believed by some people to be a powerful aphrodisiac.

The number of black rhinos has decreased dramatically in the last third of the 20th century, but due to frequent patrols and intensified anti-poaching measures, the number is on the rise again, increasing the visitor’s chances, to spot one of the approximately 50 rhinos, mainly found in the Mara Triangle. 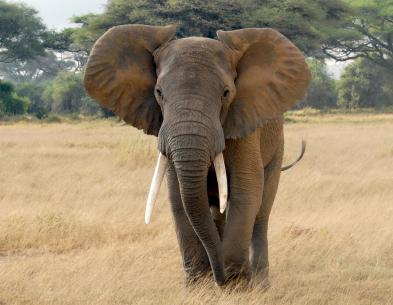 Elephants and buffalos are still found in plenty. Herds of more than 500 animals can be observed stomping over the plains in their ever-continuing search for food. Hippopotamus, or at least their distinctive backs, can be frequently witnessed in the Mara River, and are often heard during the night when they leave their wet shelter. A little-known fact about hippos is that they spend the day in the water to protect their delicate skin which is easily burnt by the tropical sun. As yet there are no SPF lotions for hippos! Lions prides of different sizes can be spotted almost everywhere and the nights vibrate with their roars.

These animals and many more plus the ‘real African’ landscape makes the Maasai Mara National Reserve the darling of all game parks in Kenya.