Situated in Northern Tanzania is the oldest, most popular national park is the world-famous Serengeti. The park itself has the distinction of being a UNESCO world heritage site.  Boasting almost 6000 square miles of grassland plains and savanna, punctuated by the occasional acacia tree or scattered bushes, the Serengeti gives visitors the feeling of having landed in ‘authentic’ Africa.

The name Serengeti means ‘the infinite plains’ in the indigenous Maasai language. The savanna stretches to the north, where rolling grasslands are replaced by acacia woodlands, expands to the shores of Lake Victoria and to the east across the Kenyan border, where it continues by the name of Masai Mara National Reserve, forming the Serengeti-Mara ecosystem. 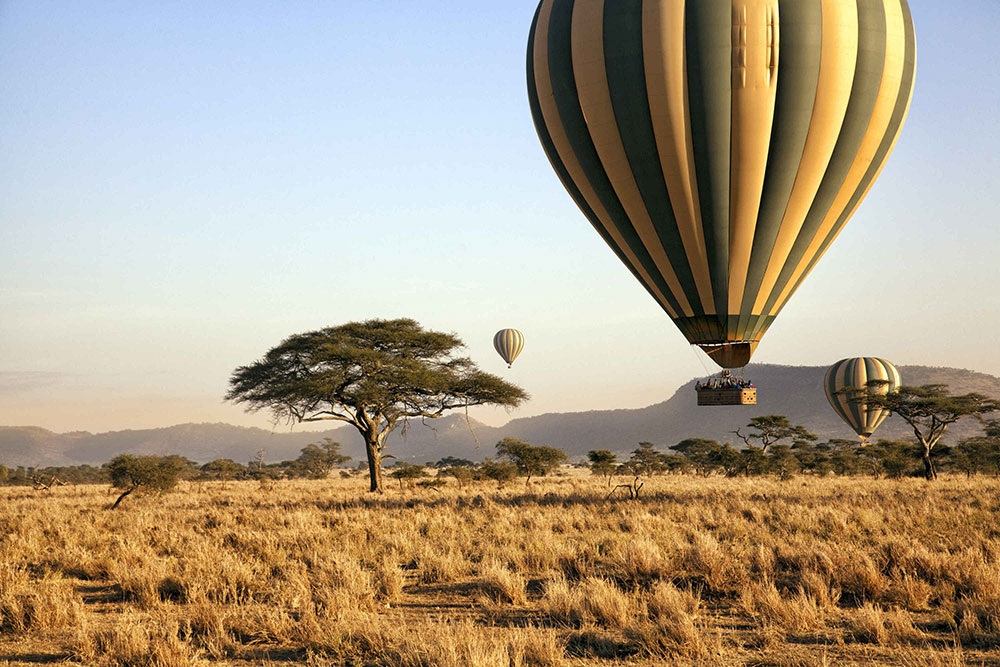 Savor the Serengeti for the greatest wildlife show on earth, and end your trip at your private rustic thatched bungalow looking out onto the Indian Ocean.

Serengeti Bushtops is a haven for true safari seekers with this ultimate luxury tented camp. It is situated in a secluded part of the northern Serengeti in Tanzania in a private location only 25 kilometers from the Mara River which is directly on the path of the main migration route.

The camp represents classical safari lodge with east African flair and a colonial influence. This luxury lodge is situated on a hill, that overlooks an active waterhole and the Grumeti River: The waterhole is a popular place to spot Serengeti predators such as lion, cheetah, and leopard. 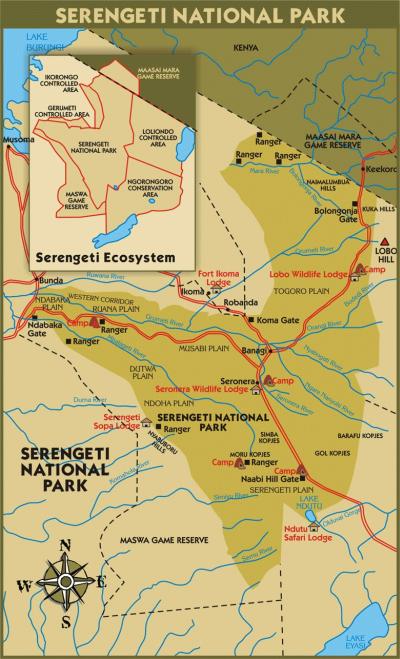 The first and most imperative question of all visitors is: ‘when is the great migration?’. Well, this is nature at work and of course such questions are not so easily answered. First of all, the migration is a cycle, repeating itself endlessly year after year. The time of migration depends on the annual seasons, the two rainy and the two dry seasons and is all about finding food and water, whilst at the same time replenishing and fertilizing the grasslands on their trail.

From December to early April, Wildebeests and other herbivores graze in small groups all over the park. Around January or February (but no guarantees!), after the synchronized birthing process of the wildebeest in the southernmost parts of the Serengeti, a feast for predators starts, as suddenly, about half a million rather defenseless wildebeest calves are born and placed at their disposal.

The main stars of the migration are the approximately 1.5 million white bearded wildebeest, mixed up with hundreds of thousands of other ungulates like zebras, Thomson gazelles, and eland antelopes. This huge moving food chain, of course, attracts the predators: mighty lions, exquisite leopards, and elegant cheetahs. In turn, all are surveyed from high in the sky by naked-necked vultures, waiting for the leftovers and to fight for them with the ever-present packs of ungainly and sinister laughing hyenas.

The migration is both brutal and awesome – a feast and a mourning in one.

A few weeks after the birthing season, when the infinite green grass carpet turns into a bright golden-brown, more and more animals gather into vast herds, ready to form an up to 30 miles long trek. Amazingly, the route is engraved into the animals DNA, and at first, the animals wander northwest – towards the rain – in search of fresh green grass. They then continue to the area near the acacia woodlands of Lake Victoria and through the western Serengeti corridor, where sometime between April and June the annual rut takes place. In less than a month hundreds of thousands of Wildebeests are mating, and so goes the pilgrimage.

The migration is not without its obstacles. Along the way are several rivers to cross, the first being the Grumeti River, where gigantic meat hungry Nile crocodiles lie in wait for their share.  Most of the year these rivers are calm, even dry, but when the heavy thunderstorm-like tropical rainfalls start, they turn into deadly traps. Not only because of the crocs, but also due to the raging torrents, which always claim a good number of lives. Dense vegetation by the river banks also provides perfect hiding places for predators of all kind. They are also there, because they can read the signs and, as with the migratory animals, the grand event is engraved in their DNA. Cutting across the border into Kenya, the animals enter the even more dangerous territory.

Maasai Mara has the densest population of predators known, and quite a number will fall prey to them.  Others die from thirst, hunger, and exhaustion, according to nature’s cruel law of the ‘survival for the fittest.’

The last major hurdle is the Mara River, where thousands and thousands of herbivores gather, sometimes for days, until the whole incredible picture is filled with grey bodies and long clownish faces reaching to the horizon. Observing the Wildebeests the visitor will witness procrastination as they smell danger, repeated checking for the best crossing point and what appears to be animals waiting for the whistle to blow as the sheer pressure builds up. Leaping forwards, turning back, another attempt, but no, not yet, the pattern repeats until the first wildebeest hero takes heart and plunges into the troubled river water. This daring plunge initiates a mass stampede – as the Wildebeests push, pull and fight their way through the turbulent waters. Tragedies occur when crocodiles strike and when the river bank is steep and slippery as some animals are unable to find their grip, leading them to be washed away by the seasonal wild waters, finally drowning from fatigue – or having succeeded in a new attempt, and maybe hitting a lioness’s ambush.

While the animals engage in their eternal struggles and victories, several camps and lodges by the river shore allow visitors to catch the spectacle comfortably from their safari chairs with a chilled drink in their hand.

Until sometime in October, the animals take a rest in the Mara, then start their passage back to the Serengeti.

OUTSIDE THE GREAT MIGRATION

Even if the visitor misses the drama of the Great Migration, Serengeti has a lot more on offer and is a perfect all year destination.  All over the wild and wide open spaces, animals are abundant.

Serengeti is home to big game, namely the famous ‘Big Five’ as listed below;

More than 3000 lions are found throughout the Serengeti, whereas the approximately 1000 leopards prefer the Seronera river region where they can be seen basking in flat-topped acacia trees. Herds of elephants populate the northern park areas, while the ruthlessly poached, highly endangered black and white rhinos are found around the kopjes, head shaped rock formations in the park center. Buffalos are still abundant and populate the entire area in herds of differing sizes.

Small game includes cheetahs, particularly in the southeastern plains; all three species of African jackals; beautifully patterned serval cats; hyrax and pythons around the kopjes; uncountable herbivores like giraffes, Grant gazelles, topi, impala, Coke’s hartebeest, Kongoni, oryx, dik-dik pairs and so many others.  And if this is not enough, the visitor can watch baboons, vervet monkeys, porcupines, honey badgers, and mongoose just to mention a few of the hundreds of species populating the plains.

Insectivorous aardvark and aardwolf, bush babies, gorillas, and nocturnal bat-eared foxes, but be aware that these are rarely spotted unless on a night game drive.

Serengeti is a bird lover’s paradise and home to an extensive avian population of over 500 species, from the gigantic ostrich to crested eagles, martial eagles, majestic crowned cranes, colorful kingfishers, different hornbill species, glossy starlings, down to the little vibrant nectar sucking sunbirds.

Since time immemorial, the people of the Maasai, one of Africa’s most famous tribes, have herded their essential cattle in the Serengeti plains. The Maasai are a semi-nomadic people of Nilotic ethnicity.  Wearing their trademark red cloths, or ‘shuka,’ the young boys used to wander the endless land with their sacred cow herds, learning survival in the wild and gathering knowledge about herbs and remedies, before their introduction to manhood. The traditional circumcision ceremony, taking place every 15 years or so, serves to initiate the boys into their new status of being Moran, that is, young warriors.

The men’s hair is artfully plaited and twisted, then dyed with a mixture of natural ocher and cow fat, whereas the women are mainly bald, sporting amazing beadwork jewelry and beaded neck rings, which are handed over to the girls as part of their family heritage.

With colonization came the white hunters, who over-exploited the rich fauna of the Serengeti grasslands, shooting countless lions, buffalos, elephants, rhinos and in fact whatever they came across with their rifles.

Seeing the lion population diminishing, the British administration declared part of the area a game reserve in 1921. In 1951 the park we know to date was established; a process in which the famous German zoo director and conservationist Bernhard Grzimek played a significant role. Grzimek succeeded in catching the attention of the world for this ecosystem, after his book and film “Serengeti shall not die,” one of the world’s first environmental documentaries, were published and screened worldwide.

Since the late fifties of the last century, when the Maasai were evicted from the area and re-settled in the likewise leading safari destination, the Ngorongoro crater, and conservation area, human habitation is forbidden inside the park.

Sadly, the area continues to face severe threats up to the present day. The Tanzanian and the Kenyan governments repeatedly plan to build a four-lane highway cutting through Serengeti and Maasai Mara, jeopardizing one of the greatest annual animal spectacles, the Great Migration, one of the “Seven New Wonders of the World.”  Crucially, this migration makes the Serengeti the world’s most famous safari destination. A global outcry amongst environmentalists stopped the ambitious but destructive plans, but even so, the project concept is taken out of government drawers every few years and re-considered.

HOW TO GET THERE

Most visitors arrive with an organized safari tour, by chartered planes or in safari vehicles.  Scheduled flights are available from different Tanzanian airports. When traveling in a private or rental car, it is advisable, to keep track with one of the organized safari cars, because the drivers know their way and they are always in contact, telling each other where the action is.

Prefer the bird’s eye perspective? Upmarket lodges and luxurious camps offer fantastic hot air balloon sunrise safaris, which end with a lavish champagne breakfast in the wilderness. An excellent honeymoon idea and an experience never to be forgotten.

AND LASTLY… WHY YOU SHOULD GO….

The Serengeti is doubtlessly Tanzania’s best park to visit. Apart from the world famous great migration, which is quite unpredictable in route and timing, there is abundant and exclusive fauna and flora to watch. The magical Serengeti is a highly recommended location for top-class wildlife spotting, accessible throughout the year.