Chobe National Park is the far North-Eastern corner of Botswana and gets a steady supply of water from its namesake, the Chobe River. The park itself covers a vast expanse of 11 700 square kilometers; most of it impenetrably thick thorn bush and sand. Chobe has a very diverse display of habitats, ranging from floodplains, magnificent baobab trees, woodlands, savanna, and ravines.

Within Chobe, there are only two areas with a modest selection of safari lodges; the main Chobe region to the north, and Savuti Marsh to the west with its mysterious appearing, then disappearing Savuti Channel.

This mobile tented camp covers an area that surrounds the Savute Channel which draws large amounts of the game that are looking for water. The camp follows large herds of animals, so guest are guaranteed to experience exceptional game viewing. The camp moves to a new spot approximately every five days, enabling guests to see as much of the landscape as possible, and also minimizing the environmental impact.

Located in Northern Botswana, Linyanti Bush Camp is a tented camp that combines traditional bush camping with modern comfort. The Linyanti marshes are an ideal spot for game viewing, as the marsh is the only source of water for miles during the dry winters, causing large numbers of animals to congregate in the area.

Elephant Valley Lodge is on the Kasane Forest Reserve between the Chobe National Park and the Matetsi wildlife conservancy in Botswana. This luxury lodge is on a route that is favored by large herds of elephant. The Chobe region is home to the largest population of elephants on the planet.

The areas bordering the river are famous for their dense population of game and are home to the biggest concentration of elephants found anywhere else in the world. Elephant herds number well into the hundreds, and large pride of lion who learned to hunt them. The river is home to hippos and crocodiles, all vying for their place in the food chain.

The giant elephant herds have ravaged many of the trees, but there is plenty to go around. The bird-life is practically unmatched, especially during the monsoon season between November and March. Herons and water waders can be counted in their thousands. However, if you visit Chobe for only one reason, the annual animal migration should be it.

This migration is not nearly as renowned as that of the Serengeti, but equally as impressive. Animals move in time-tested patterns predetermined by the rains and season. Elephants are migratory beasts as well, as they continuously journey the 300 kilometers between the Chobe and Linyanti Rivers during the wet season seeking food. 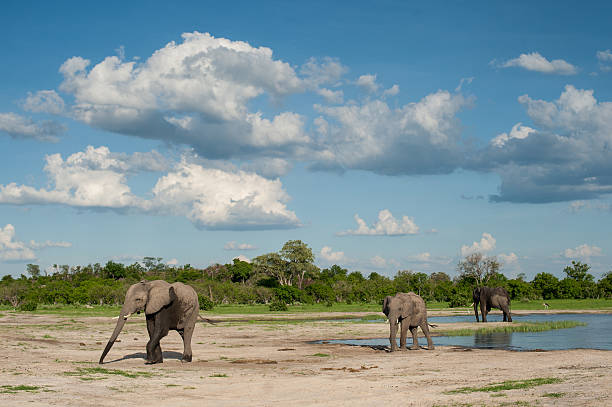 This area is considered to be one of the best game viewing spots in the southern hemisphere when the Savuti Channel is flowing. The number of game and bird-life attracted to this area is just mind-blowing. Enormous prides of lions will patrol the waterways, lying in wait for the newly migrated masses of zebras and buffalos. The sneaky hyenas are never far behind.

The Savuti Marsh was once nothing more than the bottom of an enormous inland lake, but today is comprised of a rich mixture of trees and vegetation when the river flows freely.

Today, the 100 kilometers long and 20 meters high Magwikhwe Sand Ridge surrounds the western region of Savuti. This ridge is the ancient shoreline of the inland ocean that covered most of northern Botswana. When the lake dried up, the Mababe Depression is all that remained; a flat plain that springs into life when the rains come. The Savuti Marsh is the thickest part of the depression and is the only area that can hold water since the lake dried up.

Savuti was once one of the major hunting locations in Africa before hunting was banned in the park in 1967. Livingstone was one of the many Europeans who has visited the park since the 1850s.   The primary source of water is from the Savuti Channel which changes course continually. 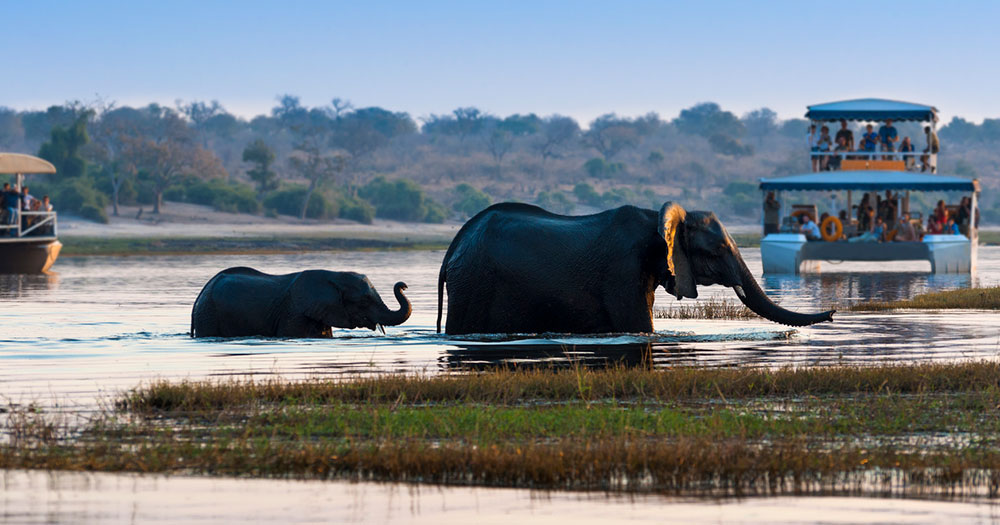 The rain brought new life to the area, and only time will tell how long the region will flourish. However, even during the dry season, the marsh is still a big attraction. Many animals will pass through the open grassland and tree skeletons during the animal migration. Elephants will half-wrestle, half-bully each other around emptying water pans while wildlife will be condensed around the remaining water areas. The landscape can be quite eerie during the dry season, but it promises to deliver a unique experience.